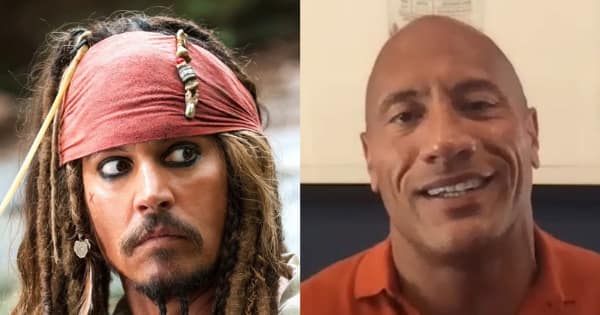 On Wednesday, Johnny Depp won the defamation suit against Amber Heard. The seven member jury favoured majorly with Johnny Depp over the arguments that happened during the trial. And amidst the trial proceedings, there have been reports of the impending projects and the upcoming projects of both Johnny and Amber. And now, out of the blue, reports have surfaced about Dwayne Johnson replacing Johnny Depp as Captain Jack Sparrow in Pirates of the Caribbean’s next instalment.

In the bizarre news of the day, rumours have been floating that Disney in order to reboot the franchise is getting Dwayne The Rock Johnson to play Captain Jack Sparrow. Well, these are just rumours. Nonetheless, they have caused a major outrage amongst the fans. An official report is yet to be released and given the change in the tides, that is, with Johnny’s win, is it less likely. Johnny Depp has played the character of Jack Sparrow to perfection. In fact, he is one of his best acting jobs and films ever, fans can argue.

Fans are shocked beyond belief and are looking for some confirmation which would say that the reports are false. Fans are angry with the makers as it is for their alleged treatment after Amber Heard had dropped her op-ed years ago about domestic violence. And fans haven’t forgotten it. As soon as the reports of Dwayne Johnson taking over Jack Sparrow surfaced fans started calling out Disney and the makers. They want Depp to be reinstated. Check out the reactions here:

@Disney im sorry I love @TheRock massive fan, but #JohnnyDepp is the only #JackSparrow. It like hiring me the big show to be the next Rock in @WWE it doesn’t work

Much as I love @TheRock NO one can replace @Johnnydepp__ll as captain jack sparrow he is the reason we watch pirates of the caribbean , I mean imagine watching mickey mouse play SpongeBob SquarePants it’s ridiculous even the thought of it, @DisneyStudios needs to rethink!

@Disney @wbpictures @WBHomeEnt Please give Johnny Depp his role back as CAPTIN Jack sparrow! No one can’t replace him! That’s his beloved character and no Pirates of the Caribbean fans will watch it with out him! @TheRock please dont take the role!#JohnnyDepp

This doesn’t surprise me a bit. It’s ridiculous woke Disney thinks they can do anything they want and the world will fall in line. They created a character that we all love without Johnny Depp it would have never worked. They should learn that from beasts the new one is terrible.

@TheRock Hey rock! I’m a big fan!!! But, please may you not take he POTC role, if the rumours are true ? Johnny Depp is Jack Sparrow, just like you’re Luke Hobbs to most of us… We would all object to the role of Luke Hobbs being recasted. Please don’t do this to Johnny…

I don’t understand WTF you think you could be Captain Jack Sparrow! You will never be able to replace Johnny Depp. Ridiculous!

Is there any truth to this? @TheRock I am a huge fan, but c’mon! Don’t let Disney do this to you! JD is Jack Sparrow forever.

uhm no— Disney screwed over Johnny Depp. Disney needs to come out and apologize for how wrongly they treated Mr. Depp and not look to reboot POTC franchise. Show some class Disney. Yuh looking goofy

@DisneyStudios officially trash for replacing Johnny Depp, with Dwayne Johnson? Just killed the whole Pirates of the Caribbean saga, can’t even watch it when it comes out now.

A former Walt Disney Studios executive has predicted the return of Johnny Depp to the franchise. A report in People.com quoted the former Disney executive saying that with the recent win of Depp in the defamation case, Johnny might be brought back aboard. If Johnny is reinstated, box office success is guaranteed as Jack is one of Johnny’s most loved characters. “With [producer] Jerry Bruckheimer riding high on the massive success of Tom Cruise in Top Gun: Maverick, there is huge appetite for bringing back bankable Hollywood stars in massively popular franchises,” an insider was quoted by People.