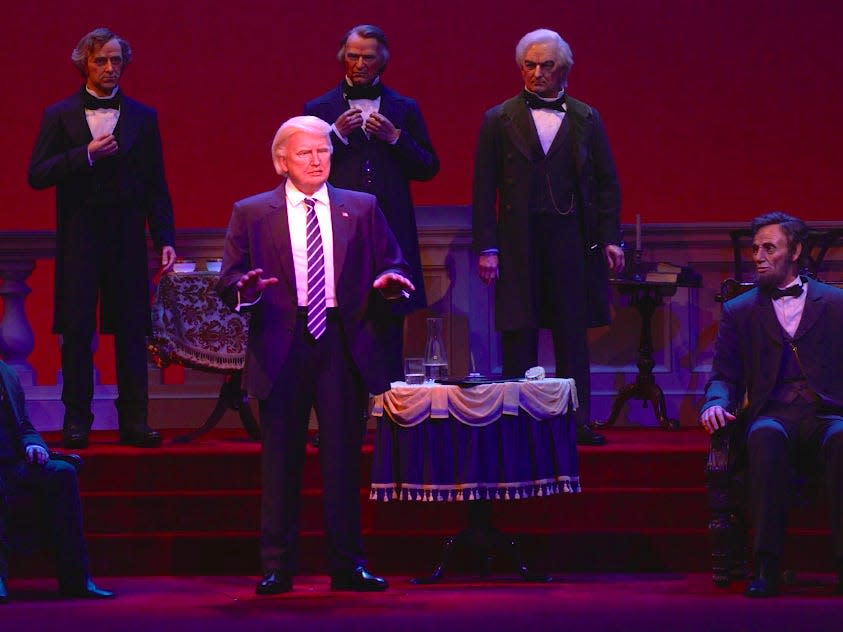 A view of the Donald Trump animatronic in Disney World’s Hall of Presidents attraction. Disney Parks

The Hall of Presidents attraction at Disney World’s Magic Kingdom is set to reopen for the first time since closing for renovations in January – and it will now feature a Joe Biden animatronic.

In a Disney Parks Blog post on Monday, Disney shared the first photo of its new presidential figure, which will debut when the attraction reopens in August. Biden’s animatronic looks almost identical to the 46th president, with a navy suit and red-and-blue striped tie.

Next to the animatronic will be a blue table covered in props. There are peach blossoms that represent Biden’s home state of Delaware, and a pair of aviator sunglasses that look just like the ones he commonly wears.

Disney’s editorial content director Thomas Smith said in the post that during the show, the animatronic will deliver “the presidential oath of office recorded at the White House.”

Before the Biden animatronic was added, Disney World installed a Donald Trump figure that was featured in the attraction between December 2017 and the start of this year. In January 2021, however, many people argued that Disney should either hide the figure behind other animatronics or remove it entirely once Trump was no longer in office.

Some also suggested that Disney replace the Hall of Presidents attraction entirely. As the Orlando Sentinel previously pointed out, tensions have risen at the attraction in recent years after animatronics representing George W. Bush, Barack Obama, and Trump were installed.

Disney World even went as far as to install metal spikes in front of the animatronics and place security guards on standby in the attraction in response to upset guests.

While it’s currently unclear where exactly the Trump figure will be moved to, Smith noted in Disney’s blog post that the animatronic will “take its place on stage among those who have previously served.”