August 26, 1918
Walt forges his parents’ signatures, and enlists in the American Ambulance Corps, part of the Red Cross. Walt alters the document, changing his birth year from 1901 to 1900.

1928
Walt meets with Charles Mintz and the directors of Universal Pictures to hear their offer to have Walt join them. Walt refuses.

December 31, 1929
The Silly Symphony film “The Skeleton Dance” is shows as a sneak preview at Hollywood’s Carthay Circle Theater.

January 13, 1930
The first Mickey Mouse comic strip is published, in the New York Mirror. The strip is initially written by Walt Disney and drawn by Ub Iwerks.

1930
Walt contacts MGM studio head Louis Mayer about signing with Disney for distribution of its films. Initially Mayer agrees, but changes his mind when Pat Powers threatens to sue anyone who interfered with his exclusive contract of the rights to Disney’s films. Walt contacts Columbia Pictures studio head Harry Cohn, who agrees to distribute Disney’s films.  Pat Powers sues, Cohn countersues, and Powers backs off.  In February of 1930, Columbia begins advancing Disney $7000.00 per cartoon.

1933
Walt goes to New York to negotiate with Harry Cohn of Columbia Pictures for an increase in cartoon advances, from $7500 to $15,000 each. Harry Cohn refuses, and tears up their existing contract.

August, 1934
Walt suggests 50 possible names for the dwarfs in the film “Snow White and the Seven Dwarfs”.

1939
A Mickey Mouse watch is sealed in the World’s Fair time capsule buried in New York.

February 7, 1940
The animated feature film “Pinocchio” premieres at the Central Theatre in New York. It cost $2.6 million to produce.

May 29, 1941
293 Disney animators, members of the Screen Cartoonists Guild, stage a strike of the Disney Studios. More than 1000 picketers appear in the first hour.

July 1941
US President Franklin Roosevelt sends federal labor conciliator Stanley White to Hollywood, to try to work out a settlement of the Disney workers’ strike.

The Printing Council forces the temporary withdrawal of the “Mickey Mouse” comic strip from its member newspapers, in support of the Disney strikers.

Technicolor Corporation announces its refusal to process Disney film until the studio recognizes the Cartoonists Guild.

September 14, 1941
The strike at the Disney studio officially ends.

August 31, 1948
Walt circulates a memo in the studio describing ideas for an amusement park, which he calls “Mickey Mouse Park”.

1948
Facing a debt of $4 million, Walt accepts an offer from distributor RKO Pictures and new owner Howard Hughes, of a $1 million interest-free loan in exchange for rights to the Disney inventory of films for educational uses.

March, 1949
The Soviet Union announces a purge of all Disney films, accusing Walt of attempting to infiltrate Russia with his propaganda.

December 25, 1950
The first Disney TV special “One Hour in Wonderland” airs on NBC, sponsored by the Coca-Cola Company. Walt Disney and several Disney cartoon characters make their TV debut. The show previews portions of the film “Alice in Wonderland”.

February 8, 1953
Walt Disney appears on TV as a guest on Toast of the Town.

July, 1953
Walt Disney commissions the Stanford Research Institute to advise on best location for the Disneyland park. Walt Disney meets with ABC president Leonard Goldenson, to negotiate a deal for ABC to benefit from Disney’s name and inventory of films, in exchange for financing Disneylandia.

September, 1953
Walt discusses his plans for Disneylandia with Herb Ryman, convincing him to draw a visual image of the park. The meeting is on a Saturday, and the drawing is needed for a Monday meeting with TV network executives in New York.

April, 1954
Disney and ABC sign an agreement regarding the building of Disneylandia. ABC advances Disney $500,000 in cash, and guarantees all WED bank loans. In exchange, ABC receives 35% ownership of Disneylandia, 100% of all profits from the park’s food concessions for 10 years, and an 8-year commitment from Disney for use of its inventory of films to be shown in a one-hour television program. Walt announces that Disneylandia would open in July, 1955. At the suggestion of ABC, Walt changes the name of Disneylandia to Disneyland.

July 21, 1954
The ground is broken for the beginning of building the Magic Kingdom of Disneyland.

Walt Disney grants Jack Wrather a 99 year license agreement to use the Disney name on any hotel in southern California.

March, 1955
Walt Disney comes up with the name “Mouseketeers” for members of the Mickey Mouse Club.

July 17, 1955
Disneyland opens, in Anaheim, California. 15,000 guests were invited, but attendance for the day is recorded as 28,154. Based on an initial US$10,000 for planning, the final cost is $17 million to build. The opening is broadcast live on ABC.  The Red Wagon Inn restaurant opens in Adventureland at Disneyland. The Refreshment Corner, on Main Street, USA opens in Disneyland.  Disney’s Mark Twain riverboat is christened in Disneyland.

July 18, 1955
Disneyland opens to the public with admission costing just $1. Cost of attractions ranged from 10 to 35 cents.

October, 1955
The Disneyland Hotel opens on a 60-acre site next to Disneyland.

October 3, 1955
Disney’s second TV show is launched, “The Mickey Mouse Club”, on the ABC network. It is a daily series, showing cartoons and introducing the talents of the “Mouseketeers”.

April, 1956
The “Bathroom of Tomorrow” attraction opens in Tomorrowland at Disneyland.

June, 1956
The “Skyway to Tomorrowland” begins operation in Fantasyland at Disneyland.

The “Skyway to Fantasyland” begins operation in Tomorrowland at Disneyland.

July, 1956
Walt attends “Walt Disney Day” in his childhood hometown of Marceline, where he dedicates a public swimming pool that is part of a ten-acre park named in his honor.

Actor Kirk Douglas sues Walt Disney for use of home movie footage of Kirk and his two sons at Walt Disney’s home. The suit is later dropped.

April, 1957
The “Sleeping Beauty Castle Walk-Through” attraction opens in Disneyland, showing a 3-D portrayal of the story of Sleeping Beauty.

June, 1958
The “Alice in Wonderland” ride opens in Disneyland.

The first “Christmas in Many Lands” parade is held at Disneyland.

March, 1960
The Circle-Vision film “America the Beautiful” opens in Tomorrowland at Disneyland.

1960
Disney sues the ABC TV network for the right to take their shows elsewhere, and buys ABC’s one-third interest in Disneyland for $7.5 million.

1962
A group of Audio-Animatronics elephants in the Elephant Bathing Pool are added to the Jungle Cruise at Disneyland.

June 23, 1963
The “Enchanted Tiki Room” opens in Adventureland at Disneyland, with the debut of Audio-Animatronics.

November, 1963
Walt and others take a plane trip across the US, to make a final selection of location for a second theme park. Central Florida is chosen. 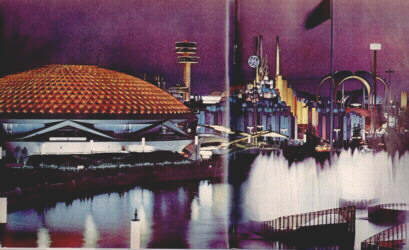 May 2, 1964
The Illinois Pavilion opens at the New York World’s Fair, with Disney’s “Great Moments with Mr. Lincoln” operating flawlessly.

May, 1964
The first death in Disneyland is recorded. 15-year old Mark Maples stands up while on the Matterhorn Bobsleds ride, and is catapulted out. He dies four days after the incident.

January 1, 1966
Walt serves as Grand Marshal of the Tournament of the Roses parade in Padadena, California.

May 28, 1966
The “It’s a Small World” attraction opens in Fantasyland at Disneyland.

October, 1966
Walt gives a press conference, and describes his plans for building an Experimental Prototype Community of Tomorrow, EPCOT.

November 7, 1966
Walt is admitted to St. Joseph’s Hospital, in Burbank, for surgery.

November 8, 1966
In hospital, Walt’s left lung is removed, and found to be full of cancerous tumors. 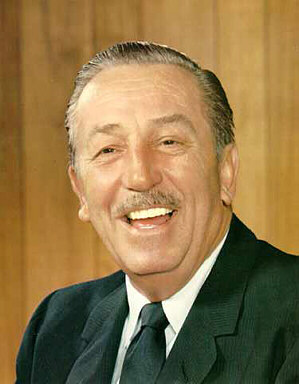 November 30, 1966
Walt collapses at his home, is revived by medics, and is readmitted to hospital.

December 16, 1966
A private service is held by Walt’s immediate family at Little Church of the Flowers of Forest Lawn Memorial Park, in Glendale, California.

October 25, 1971
The Magic Kingdom opens at Walt Disney World in Orlando, Florida.  The park is dedicated by Roy Disney to his brother Walt.