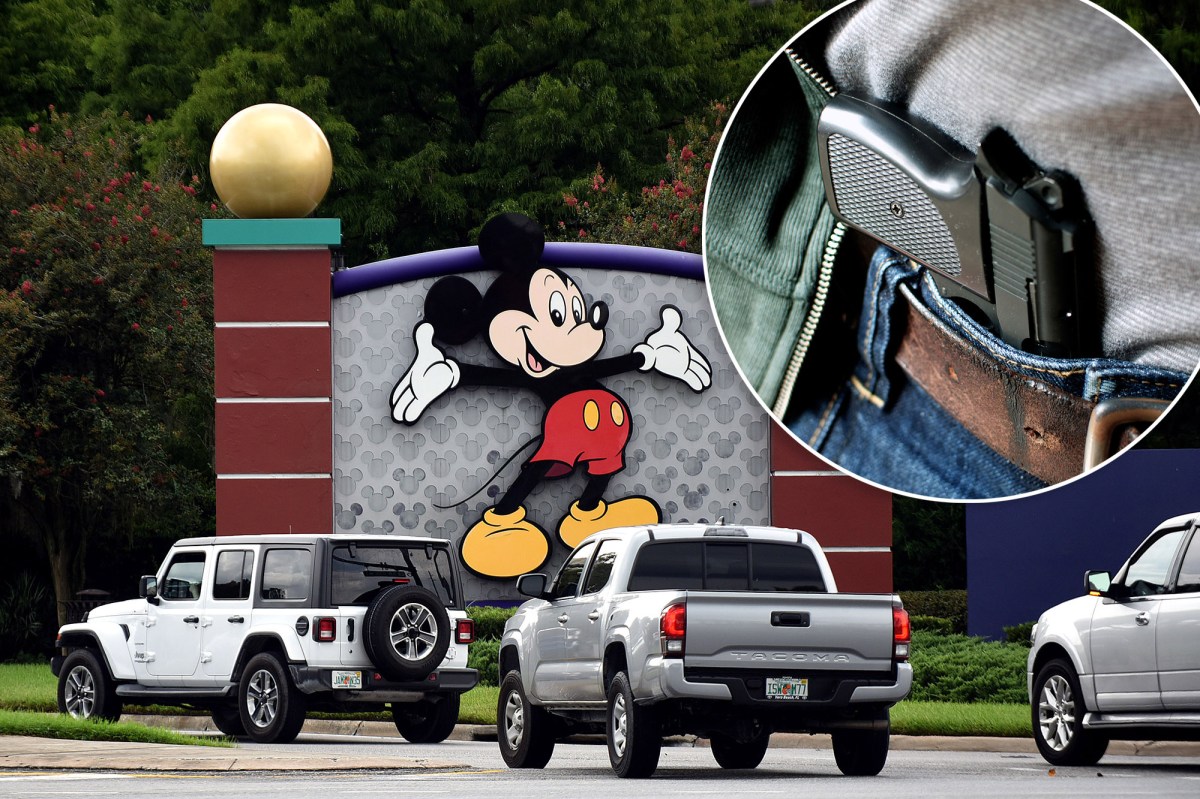 Disney World saw a dramatic rise in tourists being arrested for having concealed weapons over the past year — even though the Florida theme park was closed for months, a report said.

The world’s biggest theme park saw at least 20 gun arrests in 2020 — up from just four in 2016, the Orlando Sentinel said, based on five years’ worth of sheriff’s reports obtained through a public records request.

The problem appears to have only increased this year — with at least 14 people arrested for carrying concealed firearms in the first four months alone, the Sentinel said of records.

The 2020 rise was all the more dramatic given that the Orlando park was closed from March until July.

Just days after it opened, a Georgia mom was arrested at Disney’s Epcot Center with two loaded pistols and marijuana in a diaper bag as she visited with her family, including her 7-month-old daughter.

Disney World saw at least 20 gun arrests in 2020 — up from just four in 2016.SOPA Images/LightRocket via Gett

The vast majority of those charged end up with fines of a few hundred dollars, the Sentinel said, with case records showing that since 2016, they have rarely ended with jail time.

And they’re just the ones that end up in court, with law enforcement having discretion over whether to arrest those caught with a concealed gun without a permit.

The paper highlighted the case of a 43-year-old Palm Beach Gardens man who checked into Disney’s Polynesian Village Resort last October with an AR-15 rifle, a 9mm handgun and a cache of ammo.

At least 14 people have been arrested for carrying concealed firearms in the first four months of 2021 alone at Disney World.TNS

He told authorities he wanted to protect his family from possible Black Lives Matter protests — and was allowed to store his weapons in safes and stay at the resort.

A 52-year-old Georgia man was also allowed to stay in the park after law enforcement took his gun, which he said had been a gift from his cop brother, the report noted.

Many of those stopped told law enforcement that they forgot they were still carrying the weapon, or were unaware that they were forbidden from taking them into the resort, the paper noted.

Many of the people stopped told law enforcement that they forgot they were still carrying the weapon.Education Images/Universal Image

Experts suggested that the rise in part reflects a general rush to get weapons due to paranoia over the pandemic, riots, political upheaval and mass shootings.

“Certainly one reason that people are carrying weapons is because they’re afraid. Another reason is that they’re angry,” Joel Dvoskin, who served on the American Psychological Association’s task force for reducing gun violence, told the Florida paper.

It was reported that the rise in gun arrests could be attributed to Disney World using a new state-of-the-art artificial intelligence weapon detector system.TNS via Getty Images

It could also reflect that Disney Springs, the entertainment complex where 75 percent of the pandemic arrests happened, only started having bag checks last year, the Sentinel’s analysis showed.

Disney told the paper it is now screening more people as well as improving its security checkpoint technology last year.

“We clearly communicate that guns are not allowed anywhere on our property,” spokesman Avery Maehrer told the paper. “We appreciate the commitment of law enforcement and our security teams and the measures they take in helping protect our guests and cast members.”