Disney World is most popular for an extended visit. The grounds offer far more restaurants and more fine dining options in hotels than at Disneyland. There are also more good table-service restaurants located in the park. Disney World has decent counter-service options in the park. However, commute times are much longer at Disney World. Navigating between parks takes a minimum of 30 minutes, as does getting to and from the resort hotels.

Disneyland opened in 1955 in Anaheim, California. The amusement park encompasses 300 acres, with no room for expansion, and hosts two parks and three themed resorts. Disneyland is good for shorter visits or for those who need to move around with small children. There are three fine dining options at Disneyland: Carthay Circle Restaurant, Napa Rose and Steakhouse 55. Disneyland also has decent counter-service options. Commute times are much shorter at Disneyland. Visitors can navigate between parks in as little as five minutes, and Downtown Disney is also that close. Resort hotels only take about 15 minutes to reach.

The video below features 7 of the several things are are different in Disney World as compared to Disneyland:

Both Disney World and Disneyland offer several ticket options. Both attractions also offer discounts for committing to longer stays. Visitors to Disneyland can choose to buy tickets to a single park or both parks on a day. Beyond the single-day ticket, Disney World options do not distinguish between which parks visitors may visit.

Both Disney World and Disneyland have more than one park, all with some common features as well as features unique to that attraction.

In addition to the traditional rides, Disney World has several entertainment shows and attractions for almost all ages, sizes and experience: 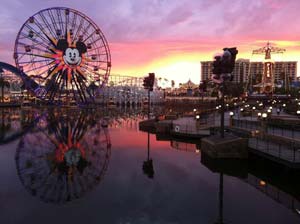 Disneyland is specially known for its dark rides, which transports visitors into a well-known Walt Disney story: 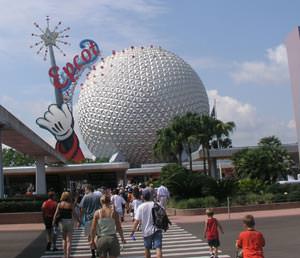 The sheer scale of Disney World is extravagantly grand, as are its really unique features. Each theme park has its own defining characteristic:

Disneyland’s unique features tend to be more modest. However, visitors appreciate them because they usually are always about well-known characters and appeal to their nostalgia.

Disneyland has Cars Land, World of Color, Indiana Jones Adventure – Temple of the Forbidden Eye, Matterhorn Bobsleds, the Disneyland Monorail, Submarine Voyage and several classic rides. Disneyland does not have any water parks.

Both Disney World and Disneyland have Minnie and Mickey houses.

Disney World and Disneyland feature daily parades at all of their parks.

The most popular show at Disneyland is Disney’s Aladdin — A Musical Spectacular.

Once on the Disney premise, the accommodation, rides and attractions are comparable in cost. If you want to see enough of either resort, the Walt Disney World Resort will turn out more expensive simply because unlike Disneyland, it is something that cannot be explored in just a day. However, Disney World may work better for groups with people of varying ages, as there are enough age-specific things for different ages, including 2 water parks and 5 golf courses, which Disneyland does not offer.

In terms of other surrounding attractions, California has about 9 distinct Theme parks (including Legoland, Sea World and Universal Studios) close by and offers a lot more to explore than the beaches in Florida.